After a smooth transition into Langkawi, with a good rest in a great hotel - Villa Abadi Resort - which picked us up from the boat and delivered us to the airport for free, our arrival in Singapore was somewhat stressful. First of all Air Asia left our luggage behind, which was then delivered to us at the hostel the next day. That was stressful, as we had no change of clothes, as well as for the worry that the backpacks could in theory never show up again.  They apparently left 25 of them behind, so it was not very likely that they could positively lose 25 suitcases all together, but you never know. Secondly, our room at Wink Capsule Hostel was - is - awful. I booked it five months ago, when already affordable accomodation seemed to be pretty limited. I should have checked the description more carefully, but back then, I was less aware of how thoroughly online reviews need to be examined. The hostel in itself is clean and ok, and very well located, but the room!!!! Definitely the shitiest room in our entire travels - we would have gladly moved out, had we not already paid for it. There was a clean and comfortable bed, but it was a tiny room with mould on the walls and without window - the smell of damp was overbearing. We even considered moving into the dorms, but then decided that being out all day and able to leave all our stuff scattered around and locked in securely was more important. Just about. It was bearable, I suppose, otherwise we would have moved out. On the up side, we were in the heart of Chinatown, and at a good time, with the Chinese New Year festivities just about to start, so the area was nicely decorated and filled with festive stalls.

I did not know much about Singapore before arriving here on Sunday.

After some reading through Wikipedia, here are a few pieces of information that I have found interesting about the place.

Singapore was founded as a British trading colony in 1819. Since independence in 1963, it has become one of the world's most prosperous countries in the world. Along with Hong Kong, South Korea, and Taiwan, Singapore is one of the original Four Asian Tigers, but has surpassed its peers in terms of GDP per capita, which is 3rd in the world!
It apparently has the world's highest percentage of millionaires, with one out of every six households having at least one million US dollars in disposable wealth. This excludes property, businesses, and luxury goods, which if included would increase the number of millionaires, especially as property in Singapore is among the world's most expensive. No wonder our horrible bathroom-less room costs £45 a night!!
But of course wealth is not shared equally - Singapore has one of the highest income inequalities among developed countries.

Singapore is a global hub for education, entertainment, finance, healthcare, human capital, innovation, logistics, technology, tourism, trade, and transport!! The city ranks highly in numerous international rankings, and has been recognised as the most "technology-ready" nation and world's safest country, amongst many other things. The Economist has ranked Singapore as the most expensive city to live in since 2013, and a tax haven. Singapore is the only country in Asia with an AAA sovereign rating from all major rating agencies, so it's super solvent. Money, money, money.
It currently has two casino complexes — or "Integrated Resorts", to use the Singaporean euphemism — opened in 2010 in Sentosa and Marina Bay as part of Singapore's new Fun and Entertainment drive, the aim being to increase the number of tourists visiting, and increase the length of time they stay within the country, and spend their money here. Indeed, the commercialism and opulence of the shopping malls, which are everywhere, is striking.

Now some of the bad stuff.
Singapore does not have a minimum wage.
It has penalties that include judicial corporal punishment in the form of caning, and there is death penalty for murder, as well as for certain aggravated drug-trafficking and firearms offences. But worse, it has strong links with Israel, a country that is not recognised by the neighbouring Muslim-majority nations of Malaysia, Indonesia, or Brunei. As the main fear after independence was an invasion by Malaysia, Israeli Defense Force commanders were tasked with creating the Singapore Armed Forces from scratch, and Israeli instructors were brought in to train Singaporean soldiers. Military courses were conducted according to Israel's format, and Singapore adopted a system of conscription and reserve service based on the Israeli model. Singapore still maintains strong security ties with Israel and is one of the biggest buyers of Israeli arms and weapons systems, spending a sizeable portion of its government dollars on defence.

So it was not surprising to read that some have dubbed the country as “Disneyland with the death penalty" and "the world's only shopping mall with a seat in the United Nations"...

Four full days were plenty of time to visit around, really. We spent some of this time with two friends - Siti, one of my team at comScore, and Bee Eng, a very old friend of Gregory from his teenage London days! They were both amazingly hospitable towards us and we felt spoilt by them both. Amazing Singaporean hospitality.
So we visited the comScore office in Singapore, which happens to be located in Chinatown, on the next road from the hostel!! A fantastic location for sure, and a lovely office, on a very pretty road. It was great to be able to meet Siti in person, after a long telephone relationship! 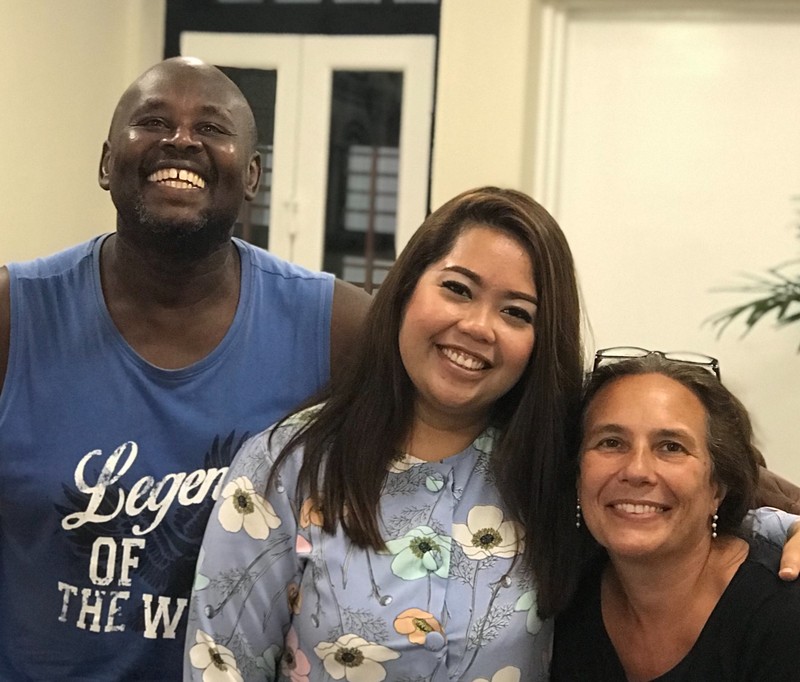 Pagoda Street. comScore occupies one of the pretty first floors with the nice plantation shutters 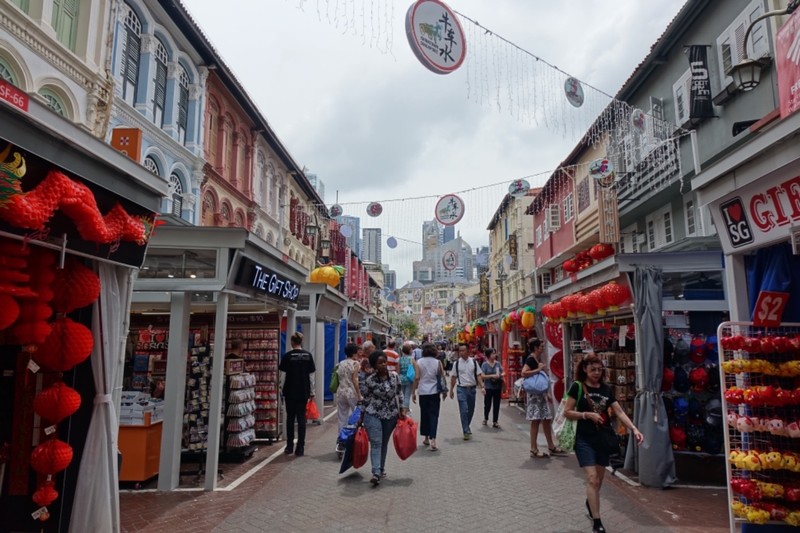 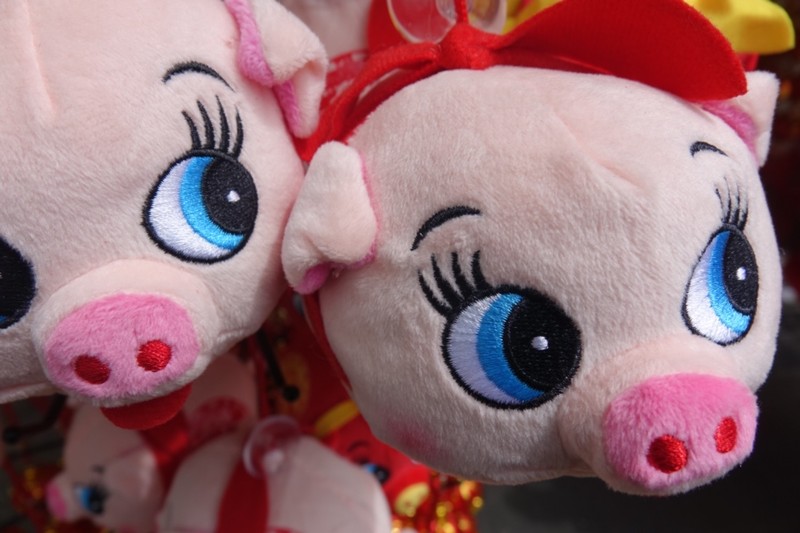 Marina Bay Sands & the Sentosa Merlion (we went to the wrong merlion in error...) 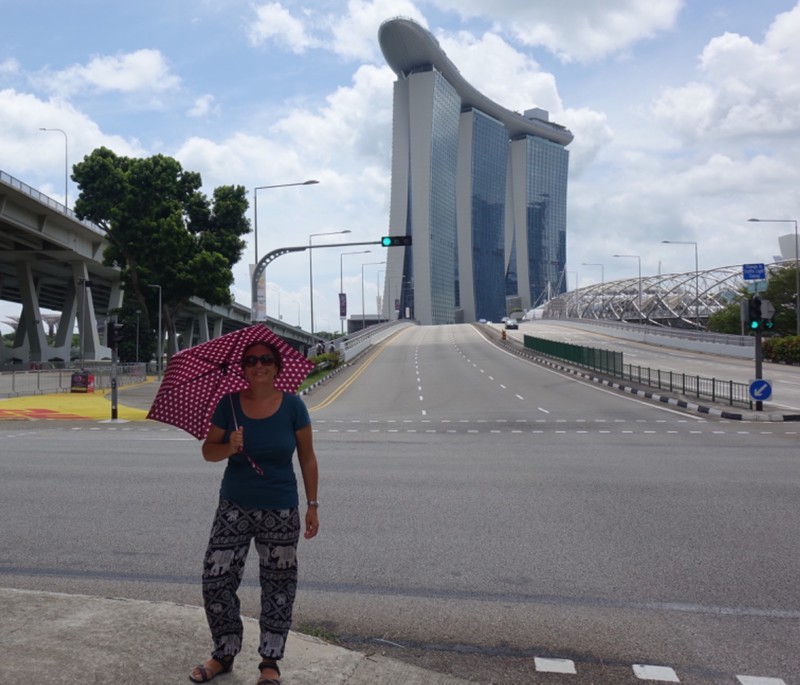 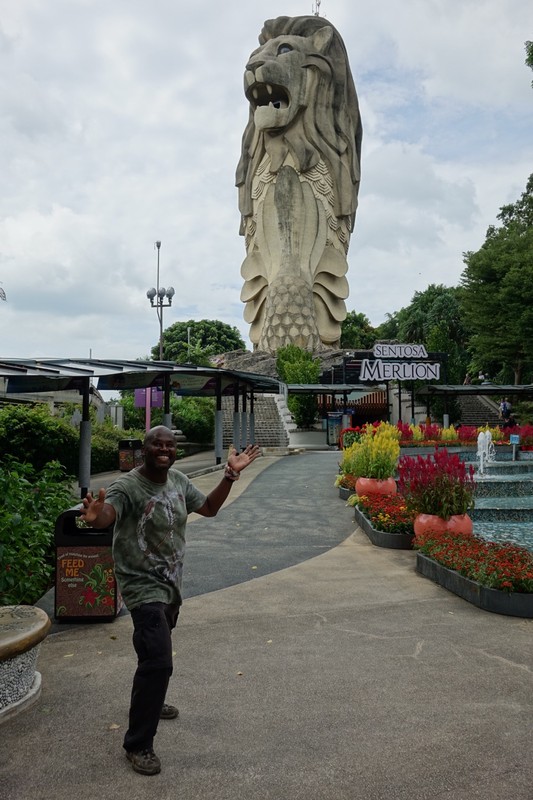 Overall, Singapore is a nice city and we enjoyed our time here. Obviously, for someone who doesn’t like shopping, consumerism and designer shops, this is not really our type of environment. But some of the buildings are really amazing, the food scene quite remarkable, and the city has a nice feel about it.
The two sites that we enjoyed most while here were the Gardens in the Bay and the National Orchid Gardens.

The giant artificial super-trees of Gardens in the Bay are beautiful, and the evening light and sound show was spectacular, and very enjoyable. 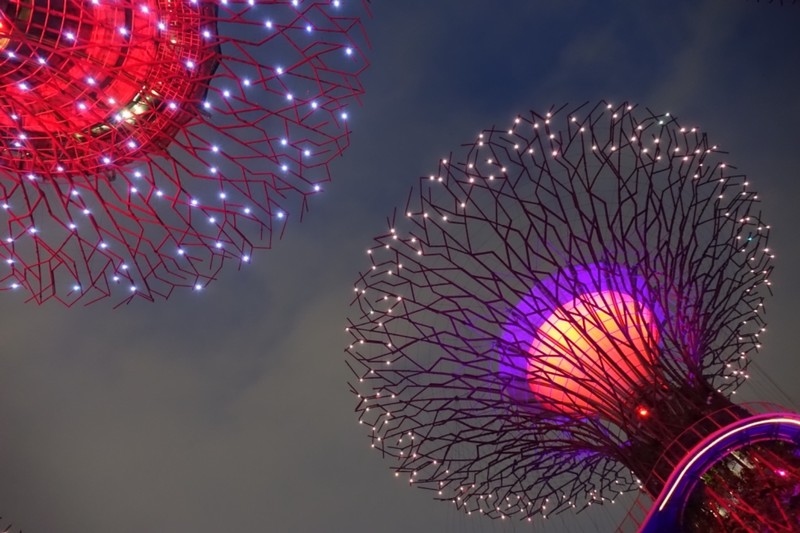 The Botanic Gardens in Singapore are one of three gardens in the world that have the honor of being designated as a UNESCO world heritage site. (Kew Gardens in London is one of the other two.) At 158 years old, they date back to Singapore’s British colony days and that is certainly reflected in the design and style of the gardens. The orchid section is quite a show, and also a nice respite from the artificial world of the city. 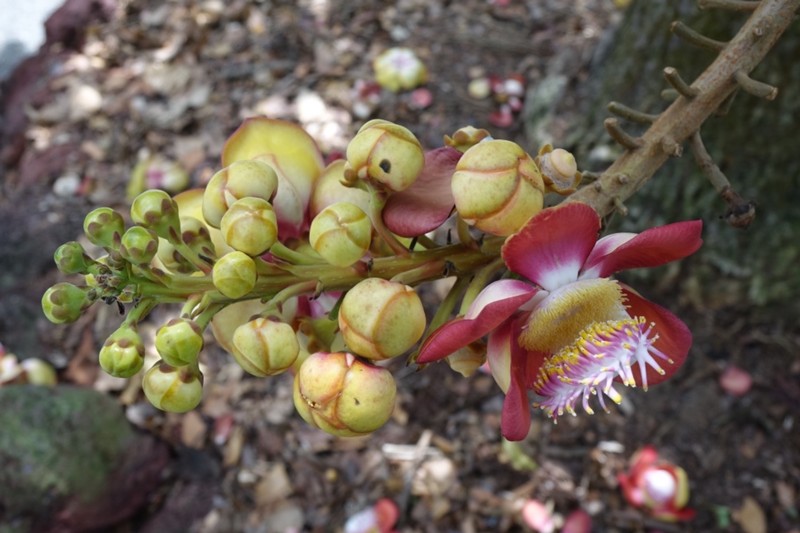 We are flying back to London tonight. We are wearing everything warm we have - we are going back to snow and 5 C!!

Posted by Flav-Greg 19:58 Archived in Singapore

Previous Next Table of contents