So here we are, a few weeks after coming home.
"Coming home" is a relative term, as we are now spending some time with family in Italy, before returning to London to settle back into some sort of routine.

We were quite ok to "come home". Almost five months on the road is a fair length of time, even though of course we would have liked to spend a little more time in the sun and around the sea in South Thailand, especially after a whole week was lost with having an ear infection that precluded me from snorkelling or sunbathing...

The trip went well and gave us what we were looking for: a break from London, a chance to visit new places, get to see what other cultures and people are up to, soak up some much needed sun, do some scuba diving, and perhaps also prove to ourselves that we are still strong and fit and able to backpack. Spending some time together was also very much on the agenda, as well as spending less time on social media. The latter certainly worked out for me, less for Gregory, who did not seem to relent from online games and other online social stuff as much. As before, our travel partnership worked quite well, with me doing the planning and Gregory being very adaptable and questioning matters only when I was pushing too hard. The ability that Gregory brings to connect with people is just unique and it certainly enhanced our experiences in each and every place we visited. His popularity in China was just hilarious.

What was our favorite place, everyone asks? Mmm. The first part of the trip was more intense, with China and Japan being particularly interesting. Our favourite countries were probably the Philippines and Japan, and we would have to toss a coin if we were told we could only now visit one of the two. Very different places obviously, but both amazing in their own way. The Filipinos stole our hearts, the most amazing and lovely people ever! Japan is also quite special and distinctive, and I was really super happy to have been able to go and see my old friend Akiyo. Akiyo and her family allowed us to see the Japanese people up close, and we were touched by their hospitality and affection.

A lot of people are probably wondering how much this whole thing cost. And how many countries we visited. Etc. So here below are some stats:

17,000 km (Beijing to Singapore)
10 countries
142 days
Someone advised that I should not really write how much the trip cost...

We were more or less on budget. We knew that we were not really going to be able to do this cheaply and, while I was watching our spending and being careful (a lot more than Gregory for sure), at the same time we also knew that we did not want to compromise with our comfort. We almost always had a private room with our own bathroom, we moved frequently and generally included tours and activities in each location, which adds to costs a great deal more than sitting there not doing much. So, despite our best intentions not to zoom around trying to see everything, during our 142 days of travels we did sleep in 50 different beds, meaning that we spent less than three consecutive nights in any one place on average! Our average hotel spend in the less expensive countries was about £22 per night – this was the price for a double room with private bathroom in mostly excellent family hotels, sometimes with breakfast, sometimes not. In Japan, Singapore and Hong Kong the hotel average spend was more around £45, and that was for a private room without a private bathroom. While in Hong Kong and Singapore the standard of accommodation for this price was pretty low (Singapore was the worst by far), the standard of accommodation in Japan was brilliant, including their shared bathrooms with hot toilet seats and bathroom slippers :-)

For what it’s worth, below are our travel averages. Backpackers often speak of an average spend per day – I am not sure that these averages mean much, as everyone’s standards, habits and preferences can influence the price of things quite dramatically, but here they are. For the sake of a fair country comparison, we have removed all flights, diving costs and also the Halong Bay cruise in Vietnam, which is expensive for the country standards and which therefore would have skewed the average. We took flights from Hong Kong to the Philippines, from the Philippines to Japan, from Japan to Vietnam, from Cambodia to Phuket, and from Langkawi to Singapore. The rest was all travelled by land or boat. Our daily costs in China would normally be around £43 per day, but the visa cost for China hiked things and unfortunately this is not a cost that can be avoided (£218 each, for UK citizens). High speed rail in China also cost quite a bit, but again, China is large. If time was not an issue and we travelled for days by bus or slow train, then we could have travelled China for the same price as the south of Thailand. 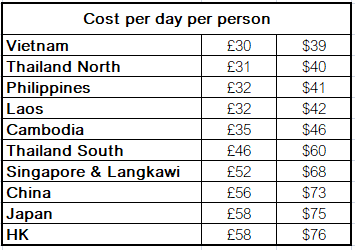 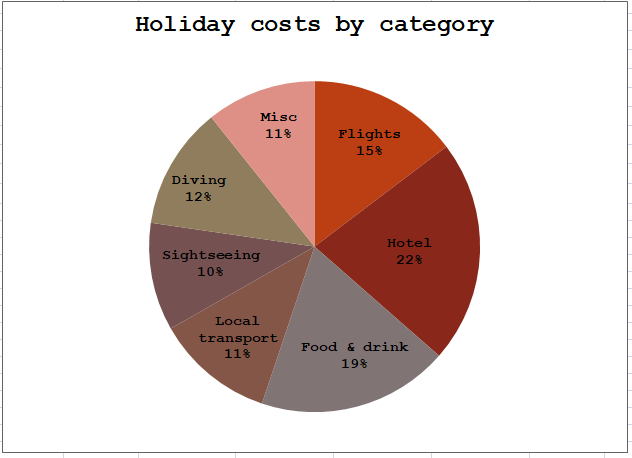 I am now trying to sort through the 5,000 photos that we managed to take... hoping to cut them down to half, possibly! And then use the best ones, together with this blog, to create our Asia travels Blurb book. Writing the blog really required a real effort sometimes, but, as we learnt in our previous backpacking trip, this effort is totally worth it to ensure that our experiences do not fade in our memory. At the same time, we hope that the blog was interesting for those reading it.